This is the second of my newly renamed Games You Should Know About series. The first was Minecraft.

StarCraft 2 is an RTS created by Blizzard. The player starts out with a small amount of resources and a few worker units. They gather resources, build structures, and build more powerful units. They then use their army of units to try to destroy the army and structures of the opposing players.

StarCraft 2 features three different races, Terran, Zerg, or Protoss. Each race has their own distinct units and play style. The player needs to understand the strengths and weaknesses of both the race they have chosen and the one they are facing. The tactics of a Terran player against a Zerg player are different than those against a Protoss player.

This campaign is very story driven. There are cut scenes between each mission which drive the story forward. Each mission then corresponds with what is going on in the story.

Multiplayer in Starcraft 2 consists of matches between different numbers of opponents. These can be 1 vs. 1, 2 vs. 2, 3 vs. 3, or 4 vs. 4. The opponents can be other players or AI controlled.

The multi-player is run through Battle.net. It uses a matchmaking system to match a player with similarly skilled opponents. The player can advance through this system by winning their matches.

Why is your gamer playing it?

The last several years has seen an increase in the number of people watching esports. The proliferation of high-speed internet has led to the rise in online streaming. This has made it possible to watch esports tournaments for more and more people.

StarCraft 2 is one of the main games people are playing professionally. Blizzard puts on leagues and ladders every year that culminate with a tournament at BlizzCon. The winners of these tournaments win thousands of dollars.

The thing that sets StarCraft 2 apart from other RTS games is Blizzard’s dedication to balance. A game can only be a good esport if is is balanced. A lot of RTS games have one particular build or unit that dominates everything else. Those games boil down to who can build it the fastest. There is very little strategy involved.

StarCraft 2, however, is very well balanced. There is not one of the 3 races that is markedly better than the other two. That makes the matches very competitive. It also means a player can improve with practice. This is what makes it so appealing.

Should you be concerned about anything?

The important thing to understand is Starcraft 2 does have a multiplayer component. The rating it received does not reflect anything a player might encounter from another player during a multi-player match.

The good thing is Battle.net includes some extensive parental controls. Here is how you set them up.

You begin the setup process on this page. Scroll down to the bottom and you will see the two buttons above.

You will receive an email with a link to your parental controls. When you click on this link, you will see a page with 3 sections. 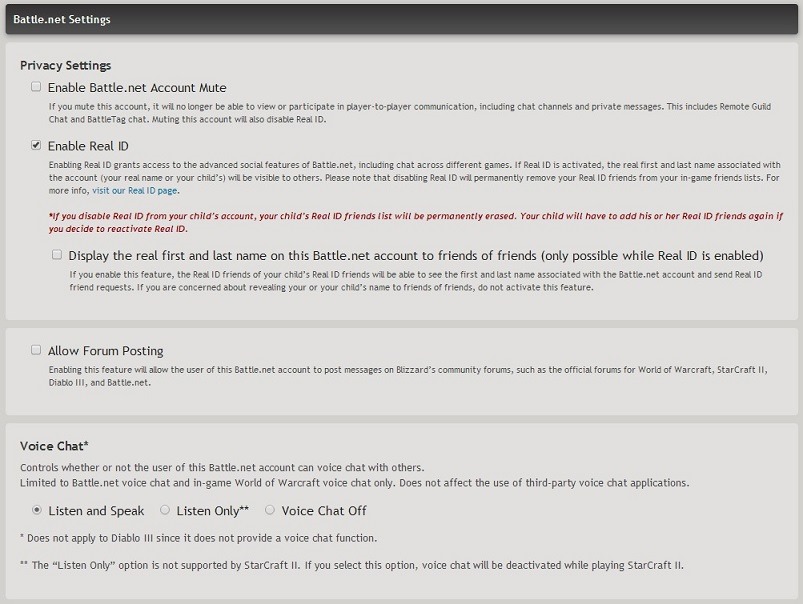 This section allows you to set some restrictions that will effect all Blizzard games, including Starcraft 2, World of Warcraft, and Diablo 3.

The main thing I want to touch on here is Real ID. A lot of multiplayer games allow the player to create a list of friends. For example, when you add another player to your friends list in World of Warcraft, you will be able to see if they are logged in and what they are doing.

Real ID takes this a step further. You can see your Real ID friends and message them even if they are playing a different Blizzard game. You might start up a Starcraft 2 game and receive a message from a friend who is playing World of Warcraft and needs some help.

The one thing to understand is that Real ID uses your real first and last name. The idea is that you would only add people you know in real life to your Real ID friend list.

The important question to ask is, who do you want to see your gamer’s real name? The answer to that question will dictate which settings you use. 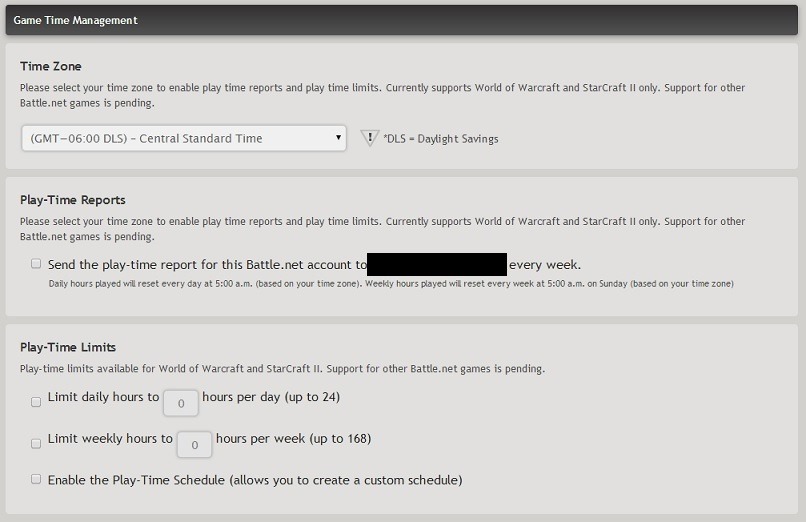 The really cool part of this is the Play-Time Schedule. Checking the box will bring up a grid of the week. This allows you to set the exact times your gamer is allowed to play.

Here is an example of a schedule you might set based on your gamer’s play style.

Let’s say your gamer has a few friends that are really into Starcraft 2. They love to jump on and play some 4 vs. 4 matches together. However, one of them has soccer practice every Tuesday and Thursday and another goes to church on Wednesday. So the only time they can play together is Monday evenings and the weekends. 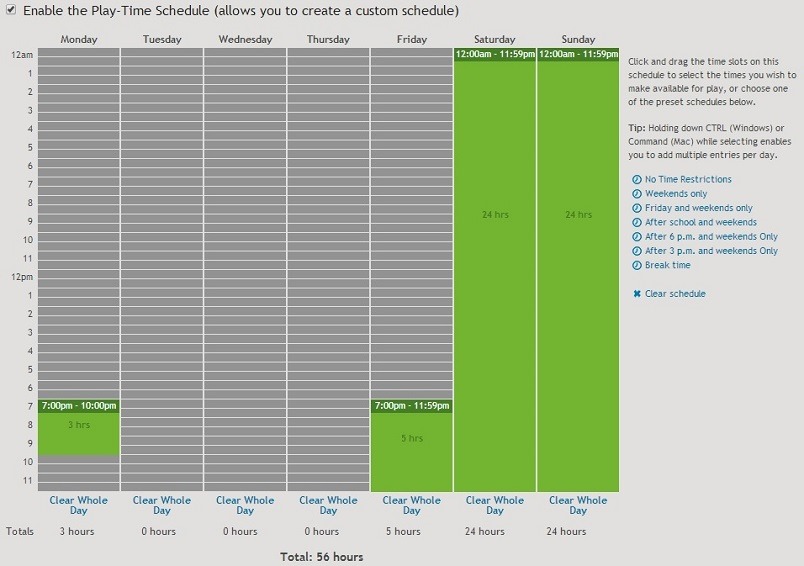 This schedule gives them 3 hours on Monday and then the full weekend to play. You could couple that with, say, a 4 hour daily limit to keep them from playing for 12 hours on Saturday or Sunday. This would give them plenty of time to play with their friends while still leaving them open for school work and other activities.

This last section deals with in-game purchase. Some Battle.net games (specifically WoW and Diablo 3) have mechanisms that allowing purchase of digital goods in-game. Unchecking this will keep your gamer from making those purchases.

How do you connect through StarCraft 2?

I have talked in the past about how intimidating it can be to try to get into a new game. StarCraft 2 is the game I am thinking of for myself every time I make that comment. I have wanted to get into it for a long time but chicken out every time I try.

With that being said, however, Blizzard has done a good job of giving you the tools to learn if you are willing.

The first tool is the single player campaign. You can set the difficulty on easy to learn the basics of how to control units and move around the map without much stress. You can then ramp the difficulty up as you get better.

The last tool is the Battle.net matchmaking system. You play a few placement matches that it uses to evaluate your strength. It then places you in a ladder appropriate to your skill level. This gives you the opportunity to learn and improve against similarly skilled people instead of being crushed by higher skilled players all the time.

I can understand this seems daunting. Luckily there are other ways to connect with your gamer through StarCraft 2.

As I mentioned, StarCraft 2 is one of the main esports games right now. There are several tournaments you can watch online throughout the year. These include the World Championship Series and DreamHack.

The streams of these tournaments continue to get better and better. The commentators do a pretty good job helping you understand what the players are doing and why. It does help to know a bit about StarCraft to really understand what they are talking about but it is not completely necessary.

Another way to connect with your gamer through StarCraft 2 is BlizzCon.

BlizzCon is a big convention in Anaheim, CA put on by Blizzard. They use it as an opportunity to show off the games they are working on, make announcements about upcoming games, and talk to their fans.

One of the big things for StarCraft 2 fans as BlizzCon is the WCS Global Finals. This tournament brings in the top 16 StarCraft 2 players from around the world to compete for the grand prize, which in 2013 was $100,000.

Tickets to BlizzCon can be a little difficult to get. You have to be paying attention for when they go on sale and then get in quick. The good thing is Blizzard has started offering a virtual ticket. This allows you to watch a lot of the convention from the comfort of your own home.